Technology has spread its wings to get deeply intertwined into every aspect of our daily lives. The conversation on media and public platforms directs its adoption and understanding. Such discussions are necessary for every field.  It grows only when opinions come from the experts in the field, creating a discourse between them and budding enthusiasts. While we witness growing discussions and opinions being published on Technology, law, policy, and society, there is an important detail that should catch our eye. Digital media publication platforms have run parallel to this discourse and published opinions and comments on these topics, but men author most of the ‘opinions’ published.

We studied the opinion pieces on Technology Law and Policy published (between June 2017 and May 2020) by nine popular online media platforms. The results showed a stark gender gap.

Results from the research 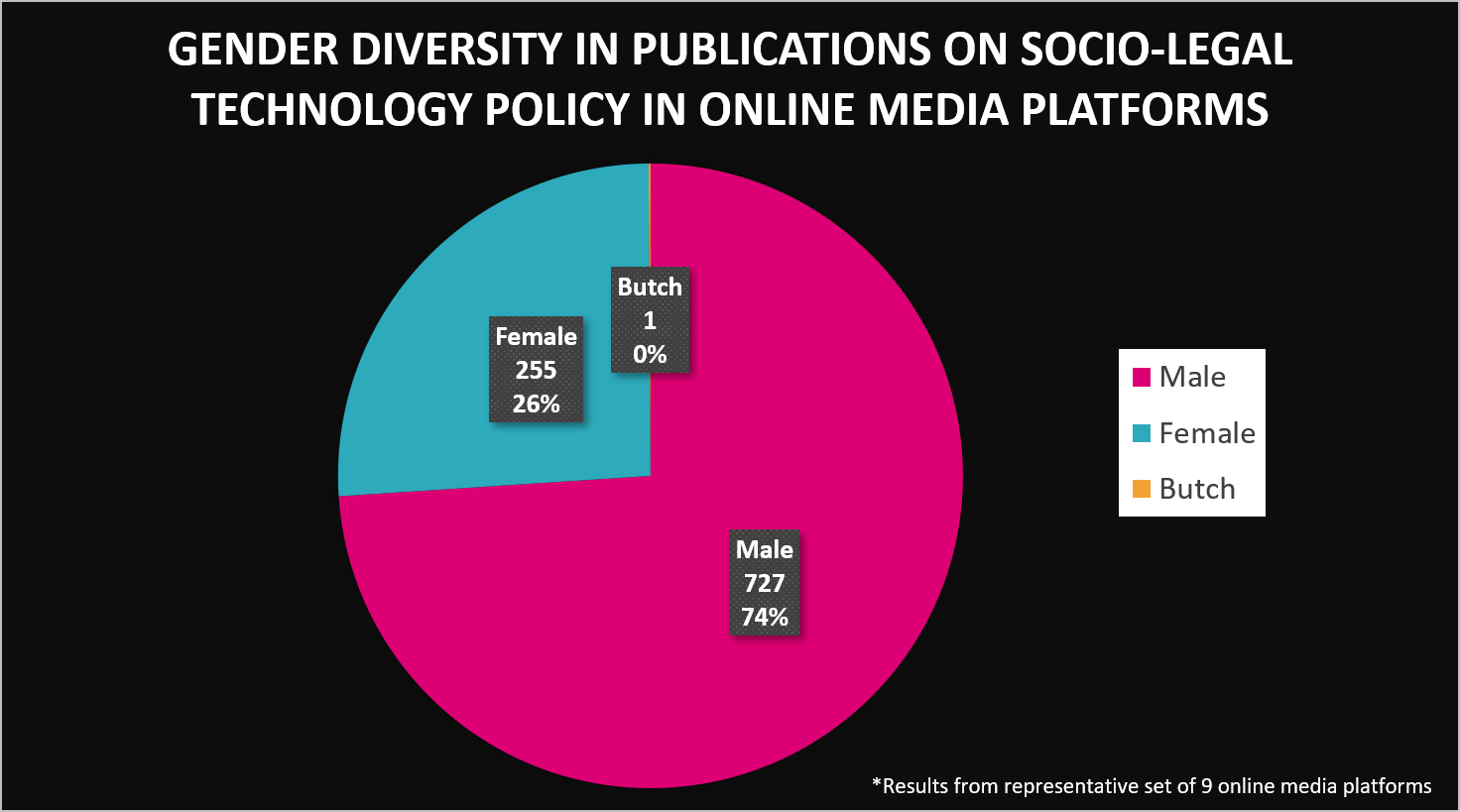 The graph above shows the percentage representation of the gender of the authors that have published opinions in total within the set of media houses that we took as our research base. A pronounced disparity exists, as evidenced by this data.

Individually considered, the disparity in gender within these platforms ranges differently. While some fair well, there is a marked difference in the number of male authors. 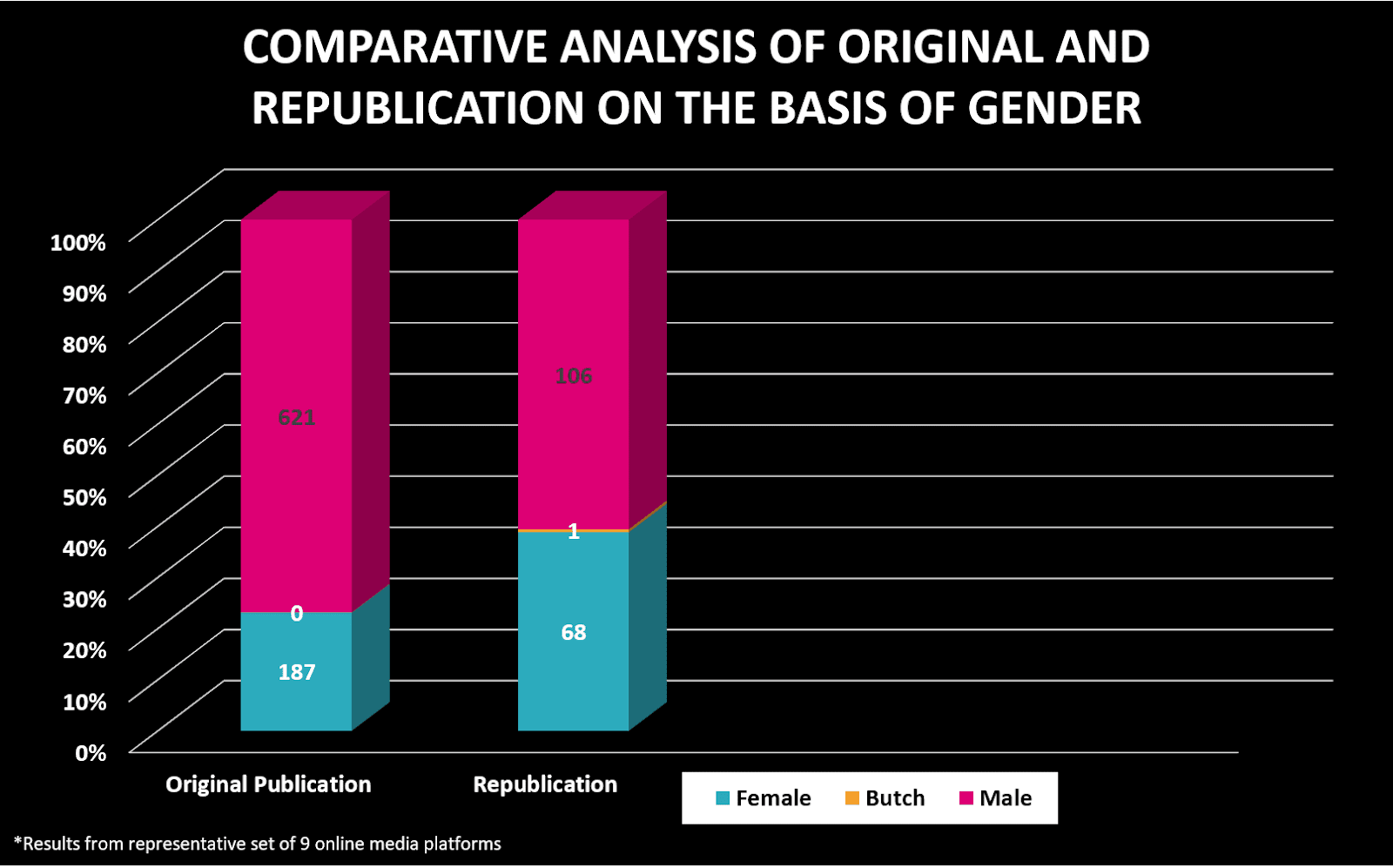 Another noticeable feature of this study resulted in the conclusion that there exists a discernible number of publications from the same author, as compared to others. We considered authors who have contributed more than five publications across the online platforms we studied to find out almost a fourth of these opinions coming from the same set of authors. This, we presume, contributes to a lack of diversity in the opinions published for public consumption. 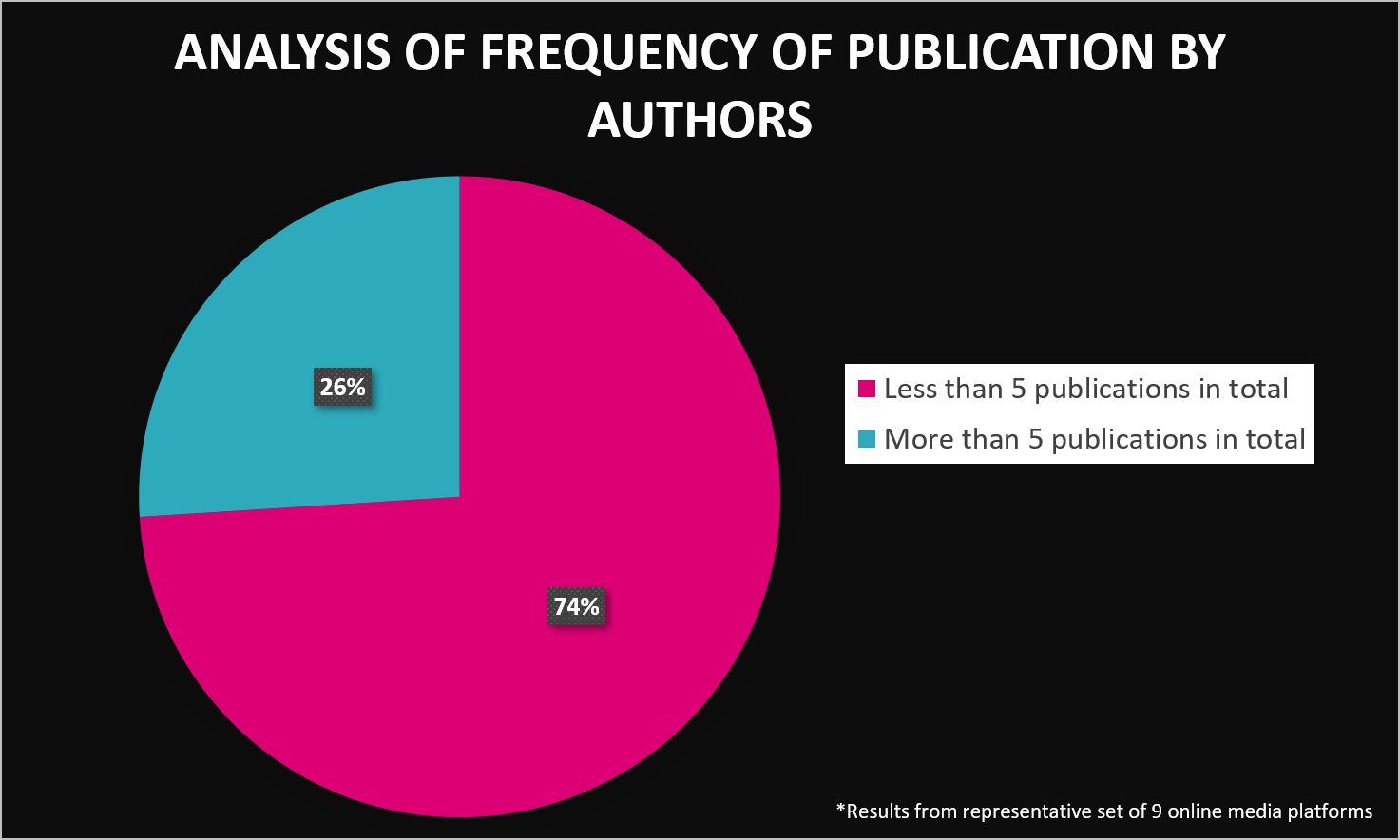 While it is evident that a gender gap in publishing exists, it is also established that this difference may not be strongly associated with editorial decisions. The apparent reason still lies mostly in the fact that more men send out pieces for publication. However, these are the questions that only these platforms can answer, and we plan to report the information on it shortly. Further, we acknowledge an apparent presence of caste dynamics in the case of Indian authors, which will be dealt with in a future extension of this study.

The solutions to bridge this gap will not surface in a day. The changing of roles from disregarding to accepting opinions of marginalized genders has taken years. As an essential step, the solution begins with more engagement and providing more access. This means it would serve plenty if platforms individually approached the underrepresented genders seeking publications from them. This increases engagement, especially reading publications from more people of the gender a person identifies themselves as, provides an ideal path for them who wish to write and publish. Further, apart from approaching the underrepresented genders, having columns within the platforms that specifically call for their opinions would help encourage and increase the flow of articles that they wish to publish.

This blog recognizes the need that brews while identifying this problem and wishes to approach it reasonably. As we are individuals that want to connect and collaborate with the marginalized genders, our end goal is to increase the representation of them in the field of Tech Law and Policy. We want them to voice out their opinions because they want to and because they have a community that does.

Note: The goal is solely to portray a prevalent disparity, and the following platforms have been chosen considering their wide reach. Further, a lot of research has gone into ensuring the veracity of the data collected and analyzed.  However, we are open to corrections on mistakes of identification.

The data report can be accessed here.